Some of the great CELEB FC teammates and our wonderful Celebrity supporters made their way to Derby on Friday 25th November.

Happening there was the first ever SSSN Charity Christmas Extravaganza, which was an evening of food, music, performances and great company, all to raise funds and awareness of the beautiful things this small Derby based charity does.

Run by Michael Ryan and a group of tireless volunteers, the SSSN began their project in March 2015, with the hope they would be able to purchase an adapted caravan. This was to enable them to give away holidays, free to families in need, those dealing with disability, life limiting illnesses and other issues, such as trauma victims, which may mean they could not afford or plan a holiday.

The response from the public and local businesses was amazing and within a year the charity was donated a static caravan. It was also entered into a draw to win a 25k grant, which they won.

They used the money to buy a 2nd caravan, to allow families to either vacation in an adapted caravan or a regular one.

2015 saw over 100 holidays given away, and 2016 has been even busier, hurtling towards the 200 mark. Next season, with the help of events such as the Derby Christmas event, they hope to have more accommodation added to their list and also provide other help (such as the reduced cost items they sell in their charity shops in Derby).

The Christmas extravaganza was a red carpet event with lots of Hollywood glitz and glamour to give it that magical touch.

This was the first trip for the Celeb FC family to Derby in our 4 years as the UK’s premier, voluntary, Celebrity Charity Football team & massive thanks goes to Michael Ryan, founder of the SSSN for inviting us to support the fantastic fundraising he does. We also want to thank The Stuart, Best Western Hotel, which Celeb FC contacted for the celebs to stay with – What a great group of people & the rooms were lovely.

The night was hosted by Jamesy & was covered by local press.

Celeb FC teammate DERRY MENSAH headlined, closing the night with 4 songs, including his new music. The crowd absolutely went wild – prompting calls for more – BUT time was against us. 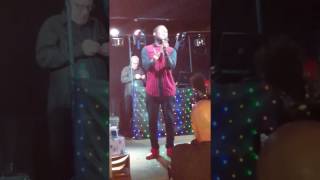 Derry - Bump and Grind a Capella 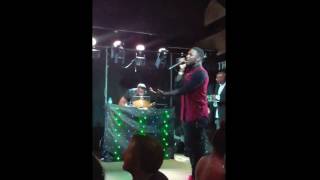 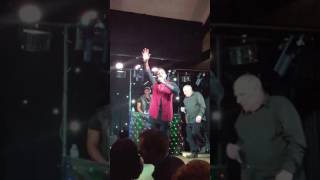 There were also some great lookalikes circulating amongst the packed event, including Elton John, Great Celeb FC friend Harry Hill (ish) & Simon Cowell along with Santa and a number of Disney Princesses too.

Linda Lambert, special Celeb FC friend has said “I always support charity events when I can, especially Celeb FC ones as they are a great group of people who give up their time for UK charities for free; any event they are involved with is always for the right reason and if I can, I will be there. What the SSSN charity does is beyond compassionate and extremely humbling, I am proud be involved.”

For me personally (Celeb FC Teammum), this event is so very important as without the SSSN charity, many families struggling with ill health & disabilities may never have the chance to have a well needed holiday. If a charity like the SSSN had been around when I needed them, my life would have been easier, I truly believe everyone needs a break every now and then, so what  Michael & SSSN do is magical. They not only provide holidays, they also provide practical support, aids and information via social media groups and their volunteer run shops in Derby and that’s why I have worked tirelessly over the last 2 months to support this event.

Special thanks to www.Rocoja.co.uk for all the Social Media, Marketing, PR & Press support.

Find out about Celeb FC charity support for UK small charities at www.CelebFC.co.uk